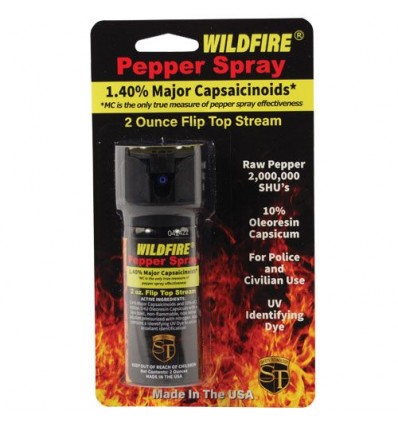 This product is no longer in stock

Ships by Next Business Day!

Wildfire 10% Pepper Spray in 2 oz can with flip actuator. Has identifying dye mixed in with the spray along with a built-in safety lock.

Major Capsaicinoids are the true heat measure, WildFire has the hottest on the market at 1.4% Major Capsaicinoids. In addition to causing an attacker pain, The WildFire 10% oleoresin capsicum formula swells the mucous membranes which makes breathing difficult and swells the veins in the eyes, causing the eyes to close.

It's made from 2,000,000 SHU's of raw pepper and these effects can last up to 45 minutes and cause no permanent damage.

Note: Must be over 18 to purchase pepper sprays and reside in a address within the United States where pepper spray is legal. We cannot ship to Massachusetts, Michigan, New York, Wisconsin or Hawaii.

No customer reviews for the moment.

30 other products in the same category: